You are here: Home / Blog / In Domestic Abuse, Digital Photos Can Say More Than Victims

New York Times reports how technology can help the law and order when the victims step back under pressure. 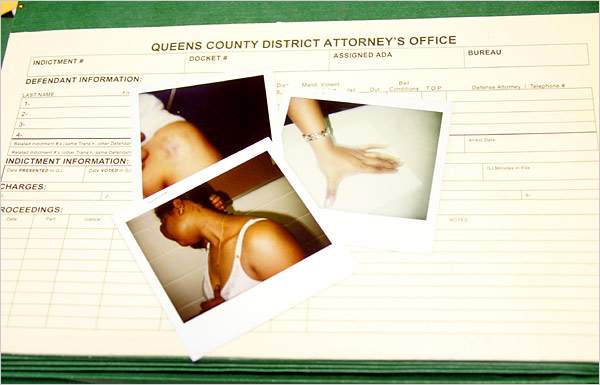 Polaroid photographs, like these, are being used less often in domestic violence cases. Prosecutors say digital photos are clearer, last longer and are more easily shared with other investigators.

Her body was crisscrossed with his rage. And after she slipped off her clothes, wincing, the police officer photographed every welt. The bruises marbling her upper arm. The places where her skin broke. Her striated back, which looked as if it had been flogged with a cat o’ nine tails.

In the first raw hours after the attack, the 39-year-old woman, a mother of five, tearfully told the police that her husband had whipped her with a cable. She would later recant her story, and say she was suffering from a skin condition caused by asbestos, a story that convinced no one.

But the Queens district attorney’s office pressed forward with the prosecution anyway, armed with the damning digital photographs. Even though the victim refused to testify, her husband was convicted in 2005 and got a one-year prison term, largely, prosecutors believe, because of the pictures.

Providing digital cameras to the police is revolutionizing the prosecution of domestic violence in New York City, according to district attorneys, victim advocates and forensic technicians.

In Queens, the first borough to use the technology, prosecutors say there has been a notable increase in conviction rates since the police there began taking digital photos at domestic violence scenes about five years ago.

Digital cameras have now been placed in all of the city’s 76 precincts and nine public housing police stations; as of last year, there were at least two in each station house, according to Chief Kathy E. Ryan, of the Police Department’s Domestic Violence Unit. And although the district attorneys in the other boroughs say they cannot gauge the cameras’ effect on conviction rates, either because it is too early or difficult to assess the impact of the cameras alone, they all say digital cameras have vastly improved the way they prosecute domestic violence cases.

“Even if there is an increase in convictions, it doesn’t tell us it’s because the photographs are so much better,” said Penny Santana, chief of the domestic violence bureau for the Bronx district attorney’s office. But, she added, the use of digital pictures “has certainly enhanced our prosecution.”

For one thing, the cameras capture what Polaroids, and the human eye, often miss. Defensive cuts on an outstretched hand. Bruises on the skin of women with dark complexions. When the pictures are magnified, other wounds appear, like broken capillaries, tiny cuts and jagged flaps of skin.

Police officers can also immediately transmit the pictures, by computer, to a database available to prosecutors citywide. Before, with Polaroids, prosecutors had to subpoena a police officer to take photographs to their office, a process that could drag on for days.

Now, as soon as a photo is uploaded, prosecutors can immediately assess the gravity of the wounds and decide how aggressively to pursue a case. The digitally transmitted pictures are now also available for a defendant’s first appearance in court, which experts say is a crucial time in domestic violence cases.

“One of the most serious decisions a judge can take is to set bail instead of sending the person home, where the battery continues,” said Richard A. Brown, the Queens district attorney.

In Queens, Scott E. Kessler, who heads the district attorney’s domestic violence bureau, has found that when the police take photographs, bail is set in nearly a third of the cases. But without a photo, he said, the figure falls to 14 percent, with the rest of the defendants being released on their own recognizance.

The reason, he says, is the extreme visceral reaction the photos elicit.

Mr. Kessler is supporting an effort by City Councilman Eric N. Gioia of Queens for money to be included in the next city budget to have digital cameras put in every patrol car in the city, though Chief Ryan said officers responding to domestic violence calls often bring the precinct’s camera with them.

Many police departments nationwide, including those in Los Angeles and Miami, have begun using digital cameras in recent years. Other departments have been slower to embrace the technology, often because they lack the money to buy the equipment or the expertise to start an online database.

For departments that use cameras, there is often lag time before officers get accustomed to them and learn how to take good pictures. In New York, Chief Ryan said officers are starting to catch up with Queens. On average citywide, police are now taking digital pictures in about half of the domestic violence cases they respond to. That was an improvement, she said, from three months ago, when they were being used in just 20 percent of the cases.

Justice John M. Leventhal of State Supreme Court in Brooklyn, the first judge to preside over the nation’s first court to handle felony domestic violence cases exclusively, said the images speed up the judicial process. Faced with graphic documentation of the crime, an abuser is often quicker to agree to a plea deal, experts say. Conversely, charges are dropped more quickly if the photographic evidence is scant.

Victims reluctant to go to a precinct house out of fear or shame may be willing to consent to having their pictures taken. Photos taken at the scene of an attack often paint a fuller picture, capturing smashed furniture, blood on floors or walls, phone cords ripped from their sockets or cellphones snapped in two.

Ward Allen, a forensic imaging consultant with SDFI-Telemedicine, a forensic photography company based in California, said digital photos have also revamped the investigation of sex crimes. Tiny cameras can photograph minuscule internal injuries, he said, and the images can now be sent, securely, virtually anywhere in the world.

The cameras also lift some of the burden of proof from victims, advocates say. Instead of having to testify, photos of wounds, often blown up for the courtroom, can speak for a victim. This has helped prosecutors in what are known as “victimless trials,” in which victims refuse to testify, a common thread in domestic violence cases.

The vast majority of domestic violence victims do not report their injuries, prosecutors say. Of those who do, most later minimize or change their stories, like the woman who was whipped with a cable. The detailed photos, along with the admissibility in court of what are known as “excited utterances,” or what the victim reports to the police immediately after the crime, help a prosecutor’s case.

There has been criticism about trials proceeding without the victim’s consent or against their will. Some believe it makes victims vulnerable to more violence, especially if they stay with their attackers. But others say victimless trials tell offenders that they are still facing legal consequences.

“It sends a message to offenders that that’s a crime, and that it’s going to be pursued no matter what the victim may or may not want,” said Maureen Curtis, senior director of Safe Horizon, the largest crime victims organization in the country.

In Queens, prosecutors are now in the midst of a particularly grisly victimless trial. The attack happened in February, on a darkened street in Springfield Gardens. A 23-year-old woman was repeatedly slashed in the face, and later, hysterical and bleeding profusely, told the police that her husband had attacked her with a razor blade and snatched her baby. The baby was found, and the woman later retracted her story. But the prosecutors had a photo of her taken soon after the attack, staring balefully at the camera, her lip split open, crescents of flesh missing from her left eyelid and cheek.

Her husband was indicted and is now on trial, according to Pamela J. Papish, an assistant district attorney. “Because of photos,” she said.

Filed Under: All Posts, Domestic violence