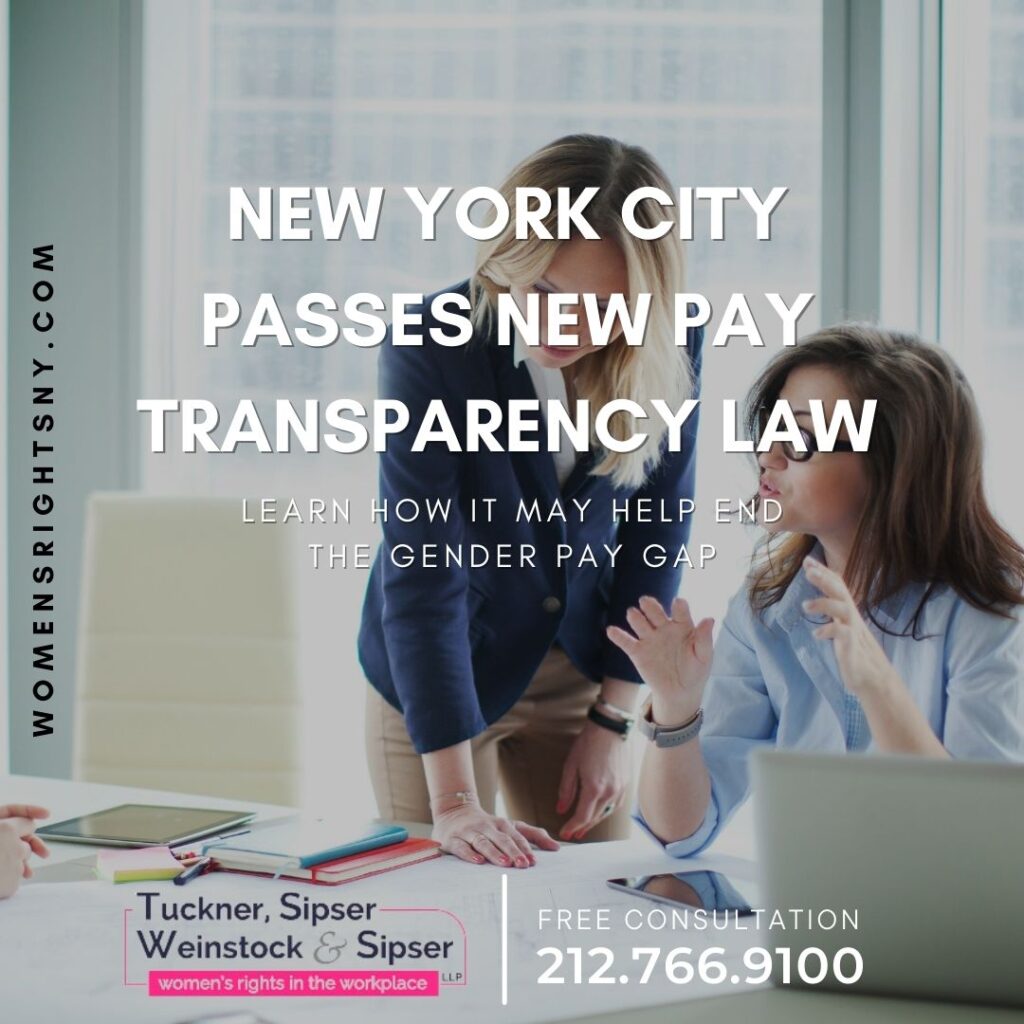 According to the Bureau of Labor Statistics, women’s annual earnings were 82.3% of men’s in 2020, and this wage gap is even wider for women of color.[1]  While the wage gap has improved since the early 1970’s when women made only about half as much as men, women still face a significant wage gap.

In order to reduce this wage gap, states including California, Colorado, Connecticut, and Nevada have passed pay transparency laws designed to help combat gender pay discrimination. Now, the Big Apple is following suit.  Starting on May 15, 2022, all New York City employers with at least 4 employees must include salary ranges for most job postings, a step that has been shown to virtually eliminate the gender pay gap.[2]

This new pay transparency law makes it an “unlawful discriminatory practice” under the New York City Human Rights Law (“NYCHRL”) for an employer to advertise a job, promotion, or transfer opportunity without stating the position’s minimum and maximum salary in the advertisement.

The salary range may include the lowest and highest salaries that the employer believes in “good faith” that it would pay for the job, promotion, or transfer at the time of the posting.

Why Did New York Pass a Pay Transparency Law?

Historically, women have lost on average over $400,000 during the course of a forty-year career compared to their male counterparts.[3]  Fortunately, according to a recent study, when pay transparency is used, the gender pay gap becomes almost nonexistent – a fact that did not go unnoticed by lawmakers and women’s rights in the workplace proponents.

As a result, after decades of advocacy, the New York City Council passed a bill aimed at promoting economic equality for women by capitalizing on wage transparency.

We believe that listing salary ranges in employment descriptions is not only beneficial to potential job applicants who may otherwise undervalue their worth, but wage transparency can also be a useful tool for employees looking to renegotiate pay with current employers so that they can overcome past gender pay discrimination.

What Is Included in the New York Salary Transparency Law?

New York City’s new pay transparency law makes an employer’s failure to provide a salary range an unlawful discriminatory practice.[4] Under the law, any business with at least four employees[5] must disclose salary ranges for employment postings or potentially face steep fines up to $125,000 and other penalties and remedies for those affected by such discriminatory treatment. In providing a pay range, businesses must use good faith to determine the range it believes it would pay for the advertised job opportunity.

Have You or A Loved One Suffered Pay Discrimination in New York?

While the new transparency laws are likely to have a positive impact on the unequal pay/gender pay gender disparity gap, the legislation does not provide relief to the millions of women who are already employed and make unequal pay for equal work, yet the New York State Human Rights Law does provide a remedy for unequal pay for all protected statuses for employees who work anywhere in New York State and believe that they are being paid differently based on their sex, race, color, age, disability, etc., for substantially similar work performed under conditions requiring equal skill, effort and responsibility.

If you believe that you are being paid less than a male counterpart for providing the same level of work (even if it is not in the exact same job), we invite you to call our office to schedule a free consultation to learn about your options for seeking employer accountability and compensation.  At Tuckner, Sipser, Weinstock & Sipser, LLP, we have been successfully advocating for women’s rights in the workplace since 1999, and we stand ready to tenaciously help you protect your rights, paycheck and your career.

[5] The measure does not apply to domestic employees.