You are here: Home / Blog / COVID-19 and Workplace Psychology

Workplace psychology following the pandemic is one of special consideration for a diverse society. Impacts from any form of mass upheaval and confusion, or from social disturbances that get noticed in the wake of a health crisis, are felt across workplaces. Covid-19’s multi-pronged footprints that include massive unemployment, seasonal employment as well as the shifting reliance on remote work, have resulted in the need for assessments that go well beyond studying of industrial labor relations.

In the US, cultural representations and ethnic identities vie for space. Gender expressions remain varied and special accommodations related to disabilities are expected. Those are among the many salient features of workplace demographics and priorities during most of the years. Workplace diversity has always remained the core strength of a labor sector that demands adequate representations from the mosaic of social locations comprising the immediate American society. Small businesses typically locate themselves in the communities they serve and over the years, even big corporations have been pressurized to become inclusive and equitable.

Following Covid-19 however, the challenges to workplace diversity have been numerous and extraordinarily incongruous. Beyond the economic slump that has altered the way market economy generally reacts, I will outline some of the more pressing aspects that are shaping up individual and organizational responses following this health crisis.

Bereavement – Never in recent history has there been such an acute need to understand collective grief. With easily a majority of people having suffered either direct losses of family members or of those that they have come to know, there is suddenly and predictably a shortage in knowing who to reach out to. It’s an atypical situation where proverbially, the counselors are seeking counseling. With workplaces increasingly going remote, the necessary human connections which enable the grieving ones to reach out to colleagues in tangible ways, have also been sacrificed.

Bereavement always had its place in a workplace – from time to time, an employee would deliver news of a personal tragedy, which then would be acknowledged with both sympathy and empathy. But mass deaths hardly ever became a featured topic at workplaces, except following a war. And yet, startling cases of deaths from Covid-19 have created a unique time and space where what used to be a shocking news has become almost commonplace. I remember being in denial and almost not believing the White House briefings last summer when the projections were hovering around 60,000 deaths of American lives. I was among those who were hoping against hope that it was not going to happen and that the medical experts and scientists were just coming up with a figure to emphasize the need for people to stay indoors. Today, that death number has exceeded half a million in the world’s most powerful economy and humane bereavement has almost given way to a collective indifference to the statistics of deaths. It’s as though we have gotten used to reading and predicting the numbers – devoid of a human face – on a daily basis. If so, the time for connecting with necessary grief resulting from human losses has certainly nosedived. 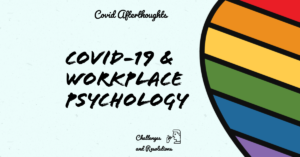 Global Village – McLuhan’s conceptualization of a global village has metamorphosed in a twisted manner. Whereas interdependence and knowledge/information-sharing have continued to remain global, even more palpable is the grief transcending national boundaries. With no society completely immune to the uncertainties in varying degrees, we are at a sink-or-swim situation like no other, prior to this pandemic.

In the US workplace, global village has a more immediate meaning, however. With millions of immigrants, permanent residents and temporary workers who form the part of their respective ethnic diaspora, the losses go beyond just the immediate family members in this country. For someone whose family resides in a European country or someone whose parents still live in India or Brazil – the global village is more than metaphorical. It’s a village one cannot even afford to travel at their will. While during ordinary days, the celebrations of one’s homeland outside of the United States used to bring joy, today the reasons for sadness instead, have swiftly doubled.

Aspirations and self-actualizations – Traditional hierarchies of needs and aspirations have met with extraordinary shifts. The year 2020 did not go down as one where career ambitions defined people like they usually do within the ambits of capitalism. For those who aspired to become higher executives earlier, mostly tried to avoid the virus. Survival of the fittest was replaced with uncertainties, even for those that considered themselves to be among the fittest. Unlike pre-Covid, goals of self-actualization gave way to need for survival at any cost. Aspirations of people for a higher quality of life have been almost curtailed to just a life that is worth living with surviving families and friends. Survival, not success, has become one of the primary goals in this new climate.

Intersectionality – Some would say the virus offered a level playing field. Without discriminations, it continued to ravage. After all, among the dead, people of all age, race and class appear. The virus was unforgiving even to the United States, thereby bridging the gap between the first world, and the third.

But looking closely, it is not all that simple. Intersectional understanding of social locations provides for radically different cues that social psychologists can ill afford to ignore.

Women of color, especially, have reported significant drops in ambitions at workplaces. According to a poll conducted by CNBC/SurveyMonkey, the shares of Black and Hispanic women who consider themselves “very ambitious” dropped from 75% to 54%. For the Latinas, the number dropped from 65% to 42%.

This is not surprising given the work-family imbalance was one of the more pressing concerns for women of color employees, which has just been made so much worse following the disproportionate number of deaths and sufferings experienced by communities of color. Healthcare access for the racial minorities was always a challenge due to economic and social reasons prior to the pandemic. And when Covid-19 struck, they were the first ones – and the largest demographic – to endure pain. Its impacts were bound to reflect across workplace cultures as well, which to this day overwhelmingly employs Black and Brown people in the semi-skilled and manual workforces – the ones we christen as “necessary sectors” that had to remain open throughout the Covid period (from dining facilities in the hospitals to cash counters at grocery stores).

Energy Depletion – In the physical workplaces just like anywhere else (whether bus stops or playgrounds), general conversations are today incomplete without mentioning of the coronavirus and its impacts. I am constantly asked about how my family is doing back in India. In plausible ways the only meaningful conversation I am having with friends and families over WhatsApp or social media or in physical interactions when possible, revolves around not just reassuring each other that everything will be alright, but also at the same time remaining skeptical with many “what if” questions that go unanswered and invariably always, suppressed. This involves an exhausting process for everyone involved and yet a phase that becomes necessary to endure.

In a classic damned if you do, and if you don’t – those who survive must answer how they made it through, and those who still haven’t been affected are to heed to the talking points that serve as a reminder that if they don’t continue remaining careful, they just might get it. With vaccination in full swings, much of the later phase of course has reduced substantially, with people mingling and laughing as ordinarily they would, but mask mandates in public settings (across transportations, stores, healthcare sectors) and general health guidelines are keeping everyone on their toes. With impending winter and the new variants on the rise elsewhere, the predominant conversation starters are Covid-related, still.

Energy depletion in explaining away the unknowns related to a virus has either made most of us self-aware experts (bordering on the imposter category), or completely clueless by comparison. Either way, burnout at the workplace as an extension of general energy loss and exhaustion, then emerges as an inevitable phase.

“Burnout is lost enthusiasm. Your original passion has faded and been replaced by a negative cynicism” (Leiter & Maslach, 2005). World Health Organization (WHO, 2019) has included Burnout in its 11th edition of the International Classification of Diseases (ICD-11): “Burnout is a syndrome conceptualized as resulting from chronic workplace stress that has not been successfully managed. It is characterized by three dimensions: 1) feelings of energy depletion or exhaustion; 2) increased mental distance from one’s job, or feelings of negativism or cynicism related to one’s job; and 3) a sense of ineffectiveness and lack of accomplishment. Burnout refers specifically to phenomena in the occupational context and should not be applied to describe experiences in other areas of life.”

Alienation – Workplace alienations have often been noticed at a collective level, following wars and natural disasters. It is no exception this time around. Markets at large have experienced economic slump and resultantly, markets have reacted rather ruthlessly. Unemployment is profoundly high and even as new jobs are being added to the economy, they are mostly geared towards rebuilding and rehabilitation efforts. The necessary psychological investment one needs to have in a job to self-fulfill, is sorely lacking. As it happens in a post-war setting, the drive to join or rejoin a workforce is now seen more as a necessity for the city’s efforts to rise up from the slumber, than as an enthused employee’s career goals waiting to be realized.

In such extraordinary times, the need has vastly increased to reevaluate workplace priorities for the employees – across sectors, and to make provisions for necessary accommodations in the form of counseling and other forms of constructive supports.

Filed Under: All Posts, Coronavirus, COVID-19