You are here: Home / Blog / Male Engineering Student Explains Why Males Cannot Live Up to the Hurdles Overcome By Females

Jared Mauldin, a senior engineering student at Eastern Washington University, observed that there was a great disparity between his male and female engineering students.  Something highly unequal and inherently unfair.  So, he decided to write a letter to the editor about it.

His letter begins as follows:

While it is my intention in every other interaction I share with you to treat you as my peer, let me deviate from that to say that you and I are in fact unequal.

What is to follow?  Perhaps a complaint that the women are not as smart as the men?  Or maybe they had an easier path to getting into the engineering school because of their gender?

Jared’s letter proceeds to outline in great detail the overwhelming obstacles that women face who are interested in STEM subjects, beginning in elementary school.  These obstacles range from women being brought up to believe that much of their worth is in how they look, to being treated differently by teachers when they didn’t understand how to do a math problem (blaming the issue on the student being a female, rather than on some other cause, such as a better explanation being needed).

The full text of Jared’s letter is presented below.

As a women’s rights in the workplace law firm, we stand behind Jared and applaud the males that recognize not only the struggles that women have to endure to enter the workplace (particularly in fields that are heavily male-dominated), but also the ongoing adversity and double standards that many women must thereafter endure at their jobs. 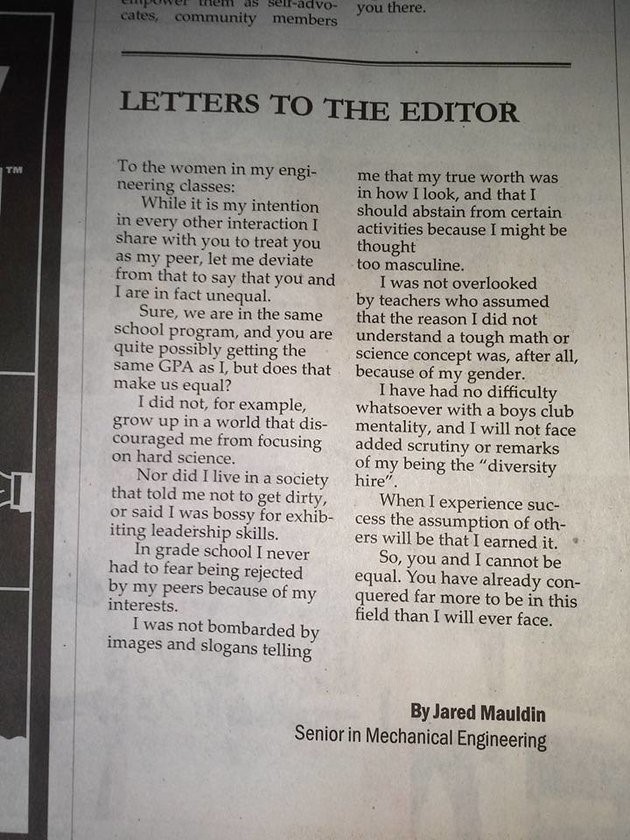