You are here: Home / Blog / Expecting a Baby, but Not the Stereotypes

Expecting a Baby, but Not the Stereotypes

Q. You recently became pregnant and expect to continue working through the pregnancy and after maternity leave. Although the initial reaction has been positive, is it possible you will face negative repercussions in the office?

A. It is possible, said Jack Tuckner, a partner in Tuckner, Sipser, Weinstock & Sipser, a law firm in Manhattan specializing in women’s workplace rights. That’s because pregnant women are often stigmatized and stereotyped and can elicit unwanted paternalistic protection, Mr. Tuckner said.

For example, he said, someone might think it’s best “if the pregnant woman isn’t included — she can’t stay out late, can’t knock back martinis with the team and then work until 11 p.m. and she has to use the bathroom all the time.” A pregnant woman might also be excluded from e-mail lists, meetings or business trips.

Eden B. King, an assistant professor of psychology at George Mason University, said that women interviewed for studies she has done on workplace pregnancy and discrimination reported feeling excluded from new projects that would help their career development.

“They are seen as already being out of the game,” she said. “Some women report experiencing a form of benevolent sexism, where they are treated like a child who needs to be protected or people pat their stomach.”

If you feel you are being marginalized or subjected to hostility you should complain, Mr. Tuckner said, because federal and state laws protect pregnant women from being treated differently from others.

Although it’s advisable to put any formal complaint in writing, an angry letter to human resources may be the wrong approach because it could result in people turning against you, he warned. Instead, write an informal letter or e-mail note. It could read something like this, he said: “‘I’ve worked here for 10 years and added a lot of value to this company and I want to continue to work here. But here’s the problem: Since I told Joe about my pregnancy and asked about the maternity leave policy, he’s excluded me from business trips and reassigned my best accounts. Can you please help me with this?” 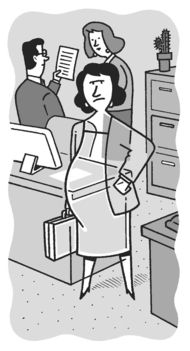 Q. When is the best time to disclose the pregnancy?

A. Many women want to wait until they are past the 12-week mark. But depending on how closely you work with others in your department, you may feel that it’s best to tell them even earlier, especially if you’re experiencing physical symptoms like nausea and fatigue.

Disclosing your pregnancy early also allows more time to communicate about it with colleagues. “I think being really explicit early on about what is happening and what your plans are for the next six months, and then six months after that, helps co-workers manage their own expectations,” Ms. King said.

Q. The physical symptoms of pregnancy are often hard to deal with at work. How can you deal with your need to use the restroom more often or handle bouts of fatigue without appearing unprofessional?

A. Marjorie Greenfield, an obstetrician and author of “The Working Woman’s Pregnancy Book,” advised combining trips to the bathroom with other places you need to visit, like the mailroom. When in meetings, sit near the door so you can make a quick escape if necessary.

“About 70 percent of pregnant women experience nausea and vomiting,” she said, “so make yourself a bag of emergency supplies to combat that” — like ginger snaps, dry cereal, crackers, hard lemon candies and mouthwash, “and an extra blouse, in case it gets stained or sweaty.”

In dealing with fatigue, ask about working more flexible hours, so that you can come in later and get a little extra sleep. Some women also try to plan time off at the eighth or ninth week, which tends to be when symptoms peak, Ms. Greenfield said.

Q. You want your career at the company to continue after you have the baby, but you worry that while you are off on maternity leave you won’t be seen as a team player anymore. How can you alter that perception?

A. Counteract that stereotype upfront, by talking to your mangers and teammates. “Tell them your career is very important to you, that you plan on coming back, are committed to the organization and your job,” Ms. King said.

Keep your foot in the door while you are on maternity leave by calling in to see how projects are progressing and stopping by with the baby for a visit, said Jamie Ladge, an assistant professor at the Northeastern University College of Business Administration who has conducted studies on pregnancy in the workplace.

Q. Are there any benefits to being pregnant at work and returning afterward as a new mother?

A. In her research, Ms. Ladge said she found a real benefit — especially for first-time mothers, who suddenly become connected to a group of people at varying levels within the company who are also parents. “You make friends with more senior people, clients and those in other departments, easing into a conversation without making it all business,” she said. “Now you have this common ground and that can have very positive ramifications for your career.”