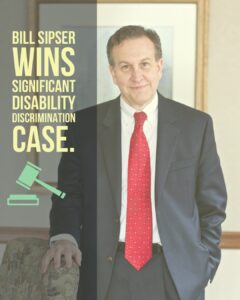 A major victory by Tuckner Sipser partner William J. Sipser at a trial at the New York State Division of Human Rights on behalf of his client Chrystal Martinez, was upheld by a June 2018 decision by the Appellate Division, First Department. The Manhattan appeals court upheld Sipser’s trial verdict where he proved that Martinez was fired illegally due to her disability.

The Appellate Court upheld Martinez’s $64,436.03 award of back pay, and her $10,000 award for emotional distress. The Court also assessed a civil penalty of $20,000 against her former employer, International Financial Services Group. The Court found that substantial evidence supported the trial judge’s finding that the company engaged in disability-based employment discrimination against Martinez in violation of the New York State Human Rights Law, and that the record also supported liability against her boss, Carlos Zapata, for his discriminatory conduct, since he directly participated in the illegal harassment and firing of Martinez.

This is the third significant disability discrimination case won by Sipser in 2018 at the prestigious Manhattan-based appeals court. NY State and NY City disability discrimination laws are more comprehensive and protective than federal law, such as the Americans with Disabilities Act, so if you work in NY and are experiencing workplace hostility regarding your disability (or perceived disability) and need assistance, please contact Bill Sipser at 212-766-9100 or 845-201-0200, or email him at wsipser@womensrightsny.com.