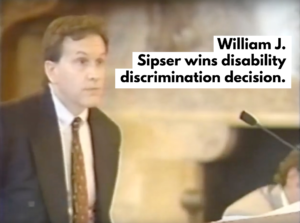 Mr. Sipser successfully argued that the stated reason for Watson’s firing raised issues as to whether it was a “pretext” for disability discrimination. The Court described several factors in overturning the trial court’s decision, including derogatory emails sent relating to Watson’s need for time off work because of her disability, the fact that she had an unblemished record with the company before she became ill, and that there were questions as to whether the employer’s managers failed to engage in a “constructive dialogue” as required by the NYC Human Rights Law concerning Watson’s need for an accommodation. This is an important decision under New York City’s expansive workplace anti-discrimination law that was enacted to protect employees who undergo difficulties due to their disability and when they require time off from work to rest and recover.

The Court’s decision can be found here.