You are here: Home / Blog / Can I Be Fired for my Political Opinions and Social Media Posts?

When Your Personal Life Affects Your Professional Life.

Let’s face it. We’re deeply divided as a nation right now and this 60/40 split of opinion is intense; it’s fracturing relationships and families, let alone workplaces. These are messy times.

So, here’s the long and short of it:

The short: Yes, for the most part, you can be fired from your job for your political beliefs. The First Amendment does not protect you, because you don’t really have “free speech,” as the free speech guaranteed by the First Amendment prevents the government from passing laws or taking actions that limit free speech. It does not protect an individual citizen from losing his or her job for expressing an opinion in the workplace, nor are your posts to social media protected speech.

If you’re like most American workers in the private sector, you’re an “at-will” employee, which means that you can be fired at any time, for any reason, or for no reason at all, and without any warning. Your employer does not have to prove “just cause” for the firing. Federal and state anti-discrimination statutes do prohibit employers from terminating employees for reasons such as race, color, religion, and sex, but it’s not illegal under federal law to fire you for political speech. Unionized workers have more protections, but they can still be fired for their social media postings just as easily as you’ll be fired as an at-will employee with no union protection.

The long: While you should still avoid political speech in the workplace, there are times when your political activity may be protected, such as when your speech touches on issues that are protected by our civil rights laws. So, while there’s no specific federal law to stop a Republican supervisor from terminating a Democratic employee, for example, simply because of political beliefs, there is often overlap between political beliefs and other legally protected characteristics. 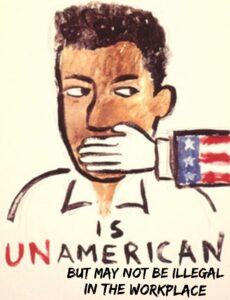 The Intersection Between Protected Political Activities and Speech

For example, if an employer fired an employee because of race or color, the employer would clearly face liability under federal and state law. Well, current political discussions include issues such as the immigration ban, the Mexican wall and the Supreme Court’s approach to LGBTQ concerns. Because national origin, sex, race, religion, and sexual orientation can be federally protected classes, if your employer disciplines you for speech relating to these issues, it may well be perceived as illegal harassment or discrimination against members of those classes, or any employees who are offended by such comments, whether they’re a class member or not. In this situation, it’s not the speech that is protected, but the employees who are protected from harassment and discrimination.

Your employer also has an obligation to ensure that workers’ expression of “political” views does not inadvertently lead to harassment or discrimination. So for example, general statements such as “Trump’s an awesome president” may cause workplace tension, but such a statement does not present legal exposure to the company. On the other hand, employee comments about banning Muslims, or the rights of women, can become problematic if they reach a level that becomes severely hostile or harassing to other employees who hear or learn of such statements.

So, it’s not so black and white, and the answer is not to simply ban all political discussion in the workplace, because such a prohibition would be impossible as a practical matter, and, because the National Labor Relations Act (“NLRA”) applies when two or more employees are discussing their terms and conditions of employment, such as chatting about how this or that politician or party’s stance may affect their wages or the company’s productivity. The National Labor Relations Board (“NLRB”) considers that to be “concerted activity”* which is protected speech. So, if you’re disciplined by your employer for certain political speech it may violate the NLRA.

*Concerted activity: While your employer can prohibit general political discussions at work, the NLRB says that private employers can’t ban discussions about workplace conditions. So, if you’re discussing why one politician is better for workers than another, your employer can’t fire you for that discussion. On the other hand, believe it or not, your employer can force you to attend meetings and listen to one-sided political sales pitches on behalf of a candidate, unless you live in Oregon, which has the Worker Freedom Act, or New Jersey, which has a similar law.

The Civil Service Reform Act of 1978 prohibits political affiliation discrimination against federal employees, and some states also have laws prohibiting political affiliation discrimination in the workplace, such as Michigan, where a law prohibits threats against employees in order to influence their votes. In Ohio, West Virginia, Pennsylvania and Kentucky, employers are prohibited from threatening to shut down operations or fire workers if a particular candidate is elected.

If you work anywhere in the state of New York you’re protected by New York Labor Law § 201-d, also known as New York’s “lifestyle discrimination” statute, which protects private employees from adverse employment actions based on their lifestyle choices outside of the workplace. Specifically, the law prohibits your company from firing you for your recreational or political activities, or for the legal use of ‘consumable products’ outside of work.,

‘Recreational activities’ covers a lot of ground, including blogging and posts to social media as hobbies. This law will not protect you if you get paid for your hobby, or if your activity or social media posts negatively affect your company, so it’s best to always think carefully before you post or blog.

If you work in NY and your employer fires or otherwise harms you due to your “lifestyle activities” under this statute, you would be entitled to sue them in state court for reinstatement, injunctive relief, and back pay, as the intent of the law is to prohibit employers from discriminating against their employees just because they don’t like their after-work activities.

Yet, the results in court using these claims for political activity terminations remain murky and mostly untested, so unless it’s crystal clear that you’re being fired for your outside recreational activities, you’re much better off avoiding any hobbies that will get you fired in the first place.

If you oppose or resist discrimination based on race, sex, national origin, religion, disability, pregnancy, age, etc., you would be protected against backlash by the federal and state employment laws that prohibit discrimination. If you report to your company’s HR that your supervisor made racist or sexist comments about a politician or political candidate that offends you (for just two examples), then you are protected from the any retaliatory backlash.

Can I be Disciplined or Fired for My Appearance at a Political Rally, March or Protest?

The main question is whether your company has an existing policy that would prohibit your absence to attend the rally, march or protest if it were not politically motivated. If the lateness and attendance policy is enforced in a neutral way–taking politics out of it—it’s perfectly legal.

If you attend a political rally on your own time–such as over the weekend—unless your state has a specific law prohibiting adverse employment actions because of your recreational activity (such as NY’s law mentioned above), your employer can fire you for attending the political rally.

If you work for a private company in the US, the best advice regarding political activity and what you post on social media is to take a step back consider the consequences first. You may be engaging in protected speech, but then again, you may not. What you say or post could place your job or career in jeopardy. Even if you don’t get fired as a result, your social media or blogging history could affect your future job prospects. Most employers routinely Google prospective hires, and what they find may come back to haunt you in unexpected ways.

If you need specific legal advice, it’s best to talk with an employment lawyer in your state. You can call Jack Tuckner at (866) Fem-Laws or you can tweet him at @jacktuckner. For more general information about employment law, check out our employee-side employment law blog.