Thousands of New Yorkers came together in solidarity this weekend to “Rally for Abortion Justice”, and to reiterate that they won’t tolerate any attacks on reproductive freedom. With a goal to fight until we have abortion access for all, marchers gathered at Foley Square with guest speakers and performers, an event that culminated in the Washington Square Park.

New York’s rally was one of over 650 sister marches nationwide, and it marked the largest single-day mobilization dedicated to abortion justice and reproductive freedom in history. 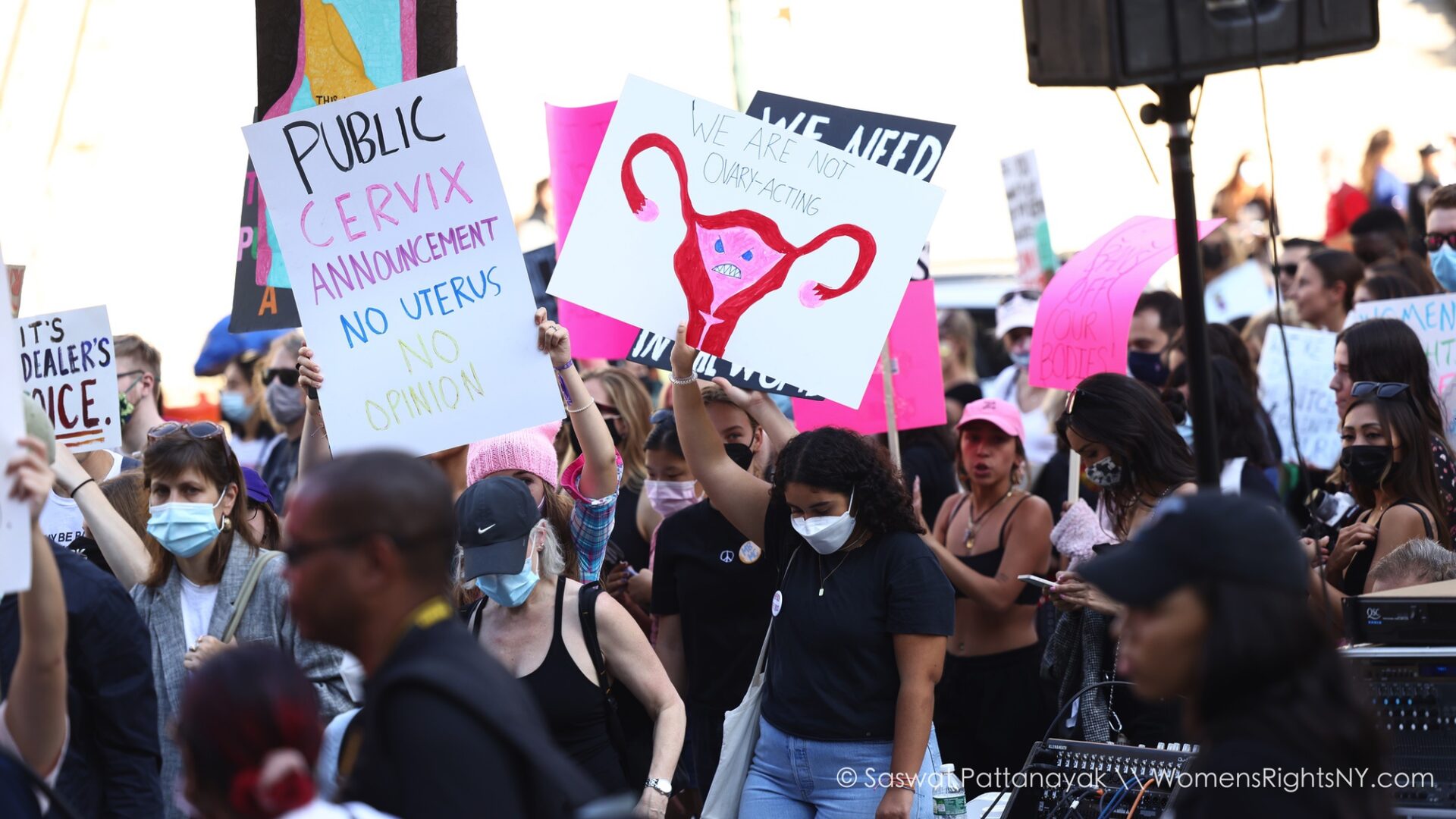 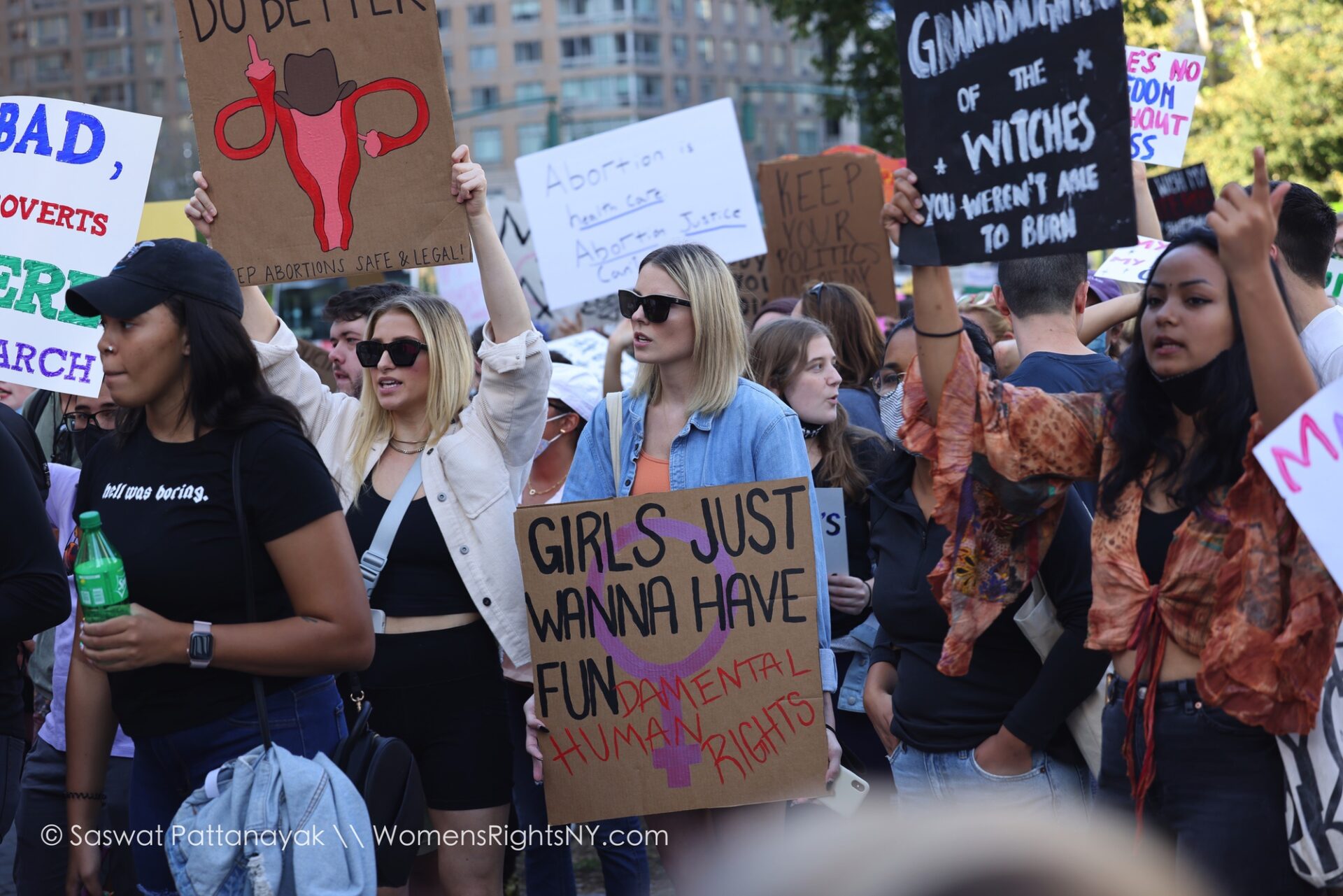 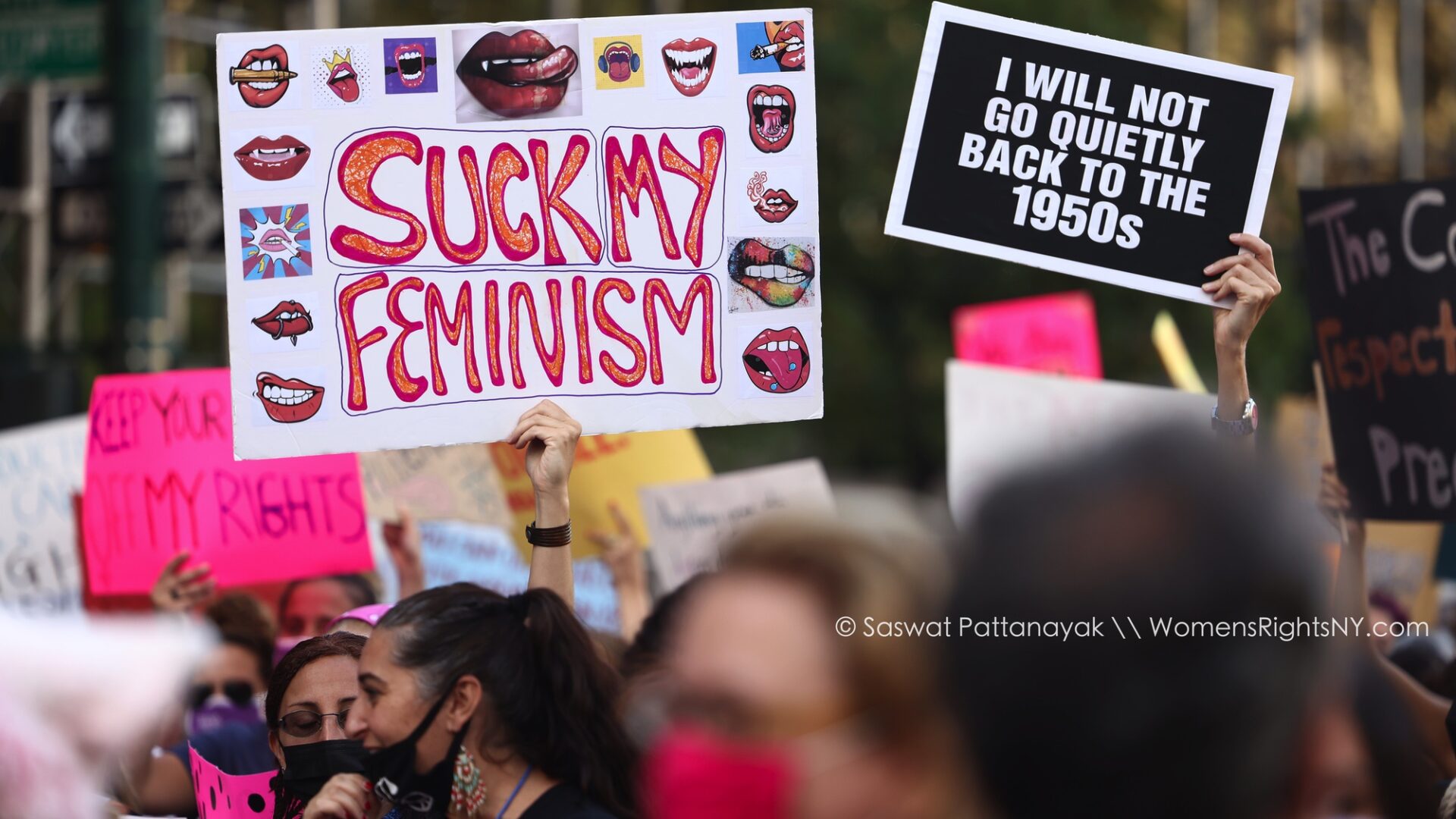 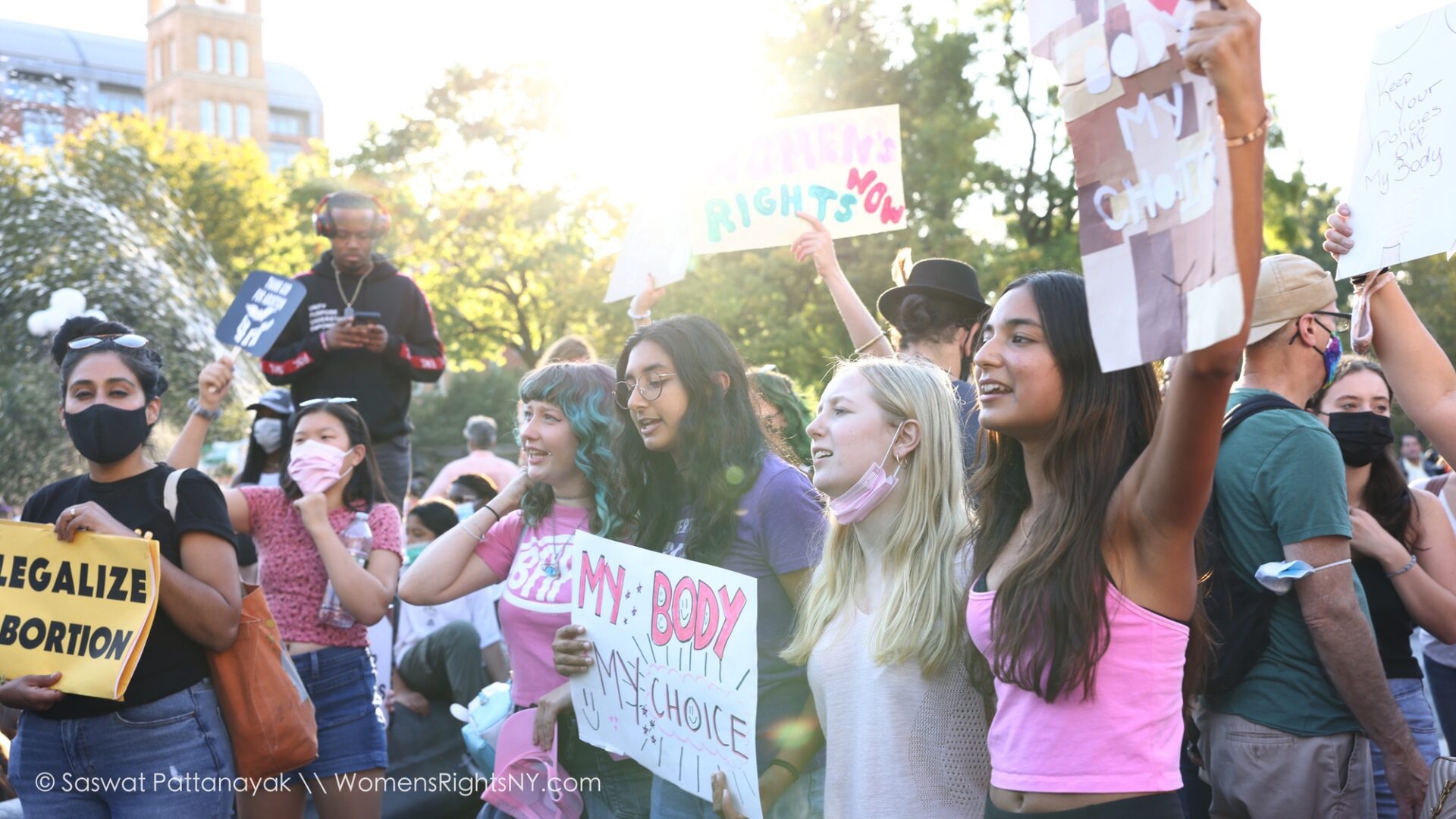 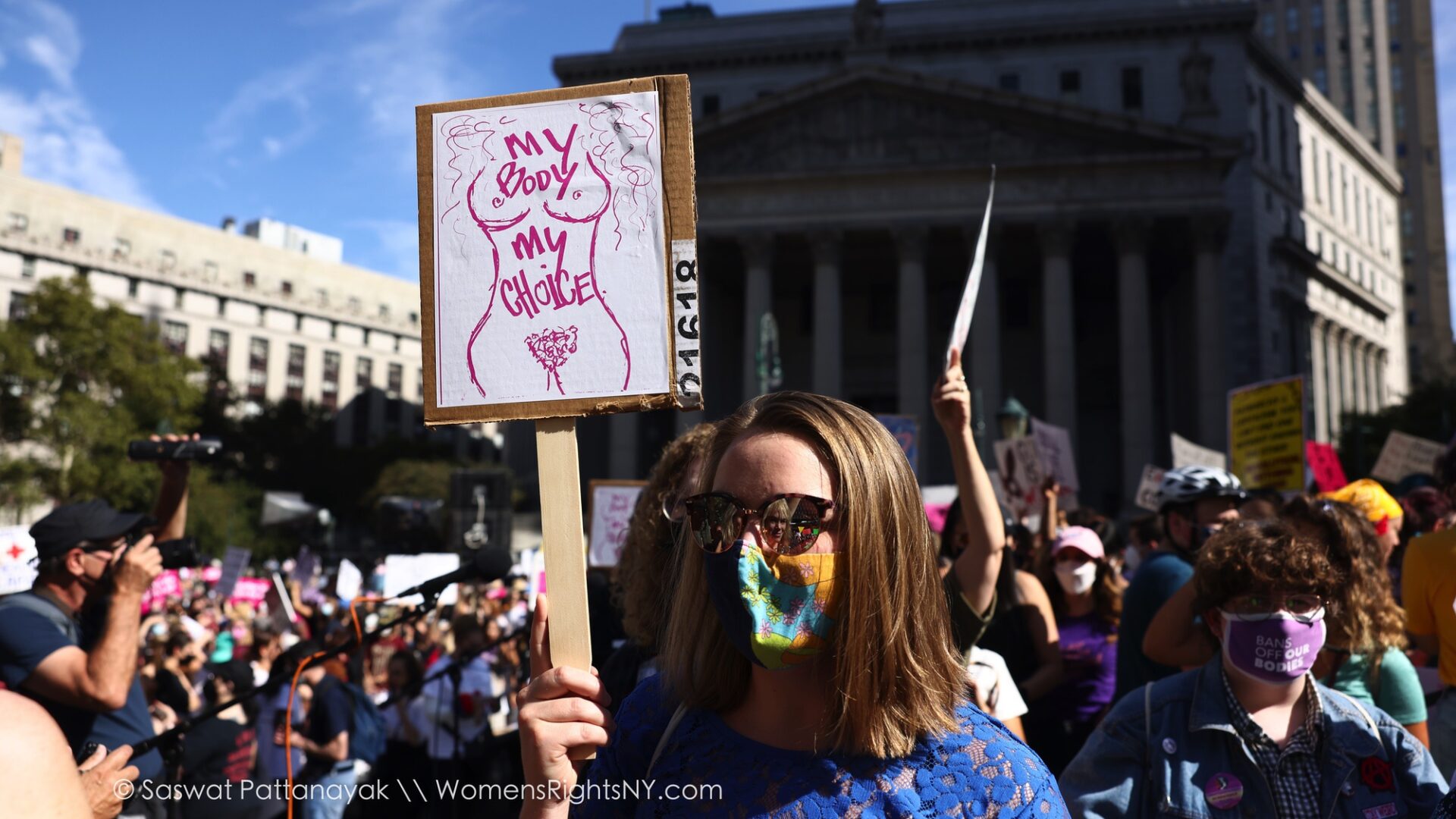 According to co-host Juliet Aguerre, the rally’s goal was to “send a loud, unified, defiant and feminist message.” Addressing the gathering, co-host Rose Baseil Massa emphasized on intersectional movements: “No human being seeking asylum within our border is illegal. Our solution must include racial, economic, and immigrant justice. Our fight is nothing, if not intersectional. We’ll not tolerate hate of any kind in this space. Racism, classism, ableism, homophobia, transphobia, xenophobia and other forms of discrimination have no place here.”

Community organizer and founder of Hijabis of New York, Rana Abdelhamid registered her protest against “the power of your body being taken away from you – to not necessarily have choice over your own body.” She said, she was angry as hell because of Republicans and the Right Wing. “Let me be clear, this right to life debate is not about life. It is about keeping poor people in poverty, it is about keeping Trans people, Black people, Brown people in poverty. This law is classist, racist, transphobic, misogynistic; it’s hurtful because we know Indigenous women are dying two times the rate and Black women are dying four times the rate as White women in the US while giving birth. And this doesn’t have to be this way.”

Donna Lieberman, executive director of New York Civil Liberties Union (NYCLU) said, “We are here for reproductive justice and equality. We are here to stand up against the unconstitutional and deeply unpopular abortion ban. It is an economic, racial justice catastrophe.”

Heidi Sieck, chief empowerment of Vote Pro-Choice said, those who circulate “graphic lies and medical procedures that are fake to shame us into not telling our abortion stories” must stop right now.

New York Congresswoman Carolyn Maloney came to support the protesters saying, “I can’t believe that we are still fighting this fight.”

New York City drag queen and activist Brita Filter said, “Abortion rights are LGBTQ rights because LGBTQ and gender non-conforming people experience unintended pregnancies at higher rates than their non-LGBTQ peers. So access to these abortions for our communities is extremely important.”

New York Congressman Jerry Nadler expressed his frustration with Texas while saying, “For 30 days now, women in Texas have been stripped of their constitutional rights and have been denied the freedom to make decisions about their own lives and their own bodies.”

Pascale Bernard of Planned Parenthood was outraged at the endless saga of systemic racism and sexism: “History is repeating itself. Our foremothers have been here before. We have an obligation to be here for the women of Texas….Abortion care is health care. We are here today to rewrite history.”

NYC public school teacher, organizer and Mayoral aspirant Cathy Rojas said, “We are in the middle of a public health crisis, an economic crisis, an educational crisis, a climate crisis; but instead of dealing with the real issues, they are dividing and paralyzing us by intensifying the attack on abortion rights.”

Jeannie Park from Warriors in the Garden, said, “Our thoughts align with all women and people of color, especially ones of low income communities, non-binary and trans people, sex workers, and all other people who lie at the most vulnerable intersections and margins being most disproportionately affected by the recent abortion ban in Texas.”

Finally, Carol Jenkins, president of ERA Coalition reminded the gathering, that “Our constitution was written by a group of slave-owning white men. Everything we have been doing ever since are to repair their omissions.”

Many independent artists and performers shared their creative joys and hopes with the gathering, that included Evie Joy, Batala NY, Amsi, BETTY, Miriam Elhajli, and Resistance Revival Chorus. Co-host and organizer of the Rally, Juliet Aguerre thanked the gathering and guided them on the planned March towards Washington Square Park.