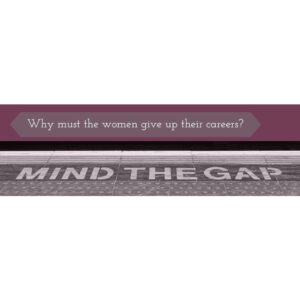 Indeed, my own acquaintanceship with many mothers of kids who attend elementary schools suggest they have consciously sacrificed their previously held careers in order to look after their children full-time. In many cases, they are able to do so because their husbands work long hours, long days, long weeks, oftentimes away from the city where their child goes to school in. One mother who used to work in the PR sector before her marriage says she is today a glorified driver whose job entails bringing her child to school and picking him up on time. Along the way, she has tried to boost up her LinkedIn profile but a clear gap of six years of no professional work has her demotivated to apply afresh to new avenues.

Oftentimes, its also upto the woman generally to give up their job in order to tend to children with special needs. Gender gap disparity is evident not just at income level, but also at the level of emotional investment in sustaining an ideal family setup. While the men go out to work, its the women who care for the cohesive unit called family. While men are busy shuttling between cities to attend conferences, or to close business deals, and to work 60-hours and 80-hours week, its the women whose job is to pick up the children, the spouse, run domestic errands, to clean the house, and to cook the dinners.

This is not some medieval time; and we are talking about highly educated women who have given up their careers to merely normalize their current status quo of ending up as unpaid caregivers. Some women even receive weekly “allowances” from their husbands to carry on doing their household duties, which in a bizarre but realistic manner, provides more security than the women who do not receive any payments for their household chores.

For majority of women having children, this is a social reality. Yes it is a malaise associated with capitalism. But the question to ponder over is to ask if out capitalism has become advanced enough to create the level-playing field for turning everyone into overworked employees. Although it has quite possibly converted everyone into becoming alienated and exploited workers, whether paid, seasonally paid, or unpaid.

According to Claire Cain Miller of the New York Times, “American women of working age are the most educated ever. Yet it’s the most educated women who face the biggest gender gaps in seniority and pay: At the top of their fields, they represent just 5 percent of big company chief executives and a quarter of the top 10 percent of earners in the United States. There are many causes of the gap, like discrimination and a lack of family-friendly policies. But recently, mounting evidence has led economists and sociologists to converge on a major driver — one that ostensibly has nothing to do with gender.”

In turn, from a psychological perspective, its not that women consciously choose to opt out of work, which would be a fine proposition in favor of leisure, rather that they do so with limited provisions that are already gendered in favor of societal fixation with men as primary financial providers. This in turn justifies the continuation of unequal gender roles – something that needs urgent addressing for the sake of future which we want to claim as belonging to the female.