You are here: Home / Blog / HerCampus Interview with Jack Tuckner – What to Do If You’re Being Sexually Harassed At Work? 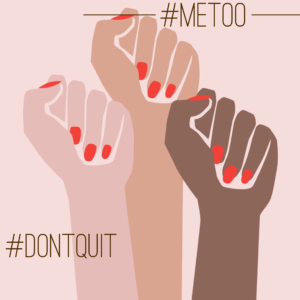 Ebony Joseph for HerCampus recently interviewed Jack Tuckner, Esq., for the article “What to Do If You’re Being Sexually Harassed At Work”. She asked Mr. Tuckner about legal options in the #MeToo era and about the origin of the #DontQuit movement. Click here to read the complete article. Reproduced below are excerpts –

By Ebony Joseph
Roger Ailes, Bill O’Reilly, Harvey Weinstein and most recently, senior NPR editor Michael Oreskes, are all men who abused their power to sexually harass their female colleagues.

Famous faces went to social media to raise their hands and say #MeToo. Rose McGowan, Angelina Jolie, Gwyneth Paltrow and Lupita Nyongo all spoke out against their harassers, but sexual harassment doesn’t just happen to women in Hollywood. Unwelcome sexualizing attention and objectifying behavior can happen in any line of work.

It happened to Samantha, a Siena College grad, at a summer job. It happened to Chelsea Jackson at Iowa State as a freelance photographer, and unfortunately it could happen to you too, but just because your story may not make headlines doesn’t mean it should not be heard.

Here are ways you can take action and protect yourself if you are sexually harassed at work. 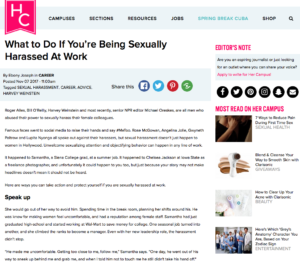 Jack Tuckner, women’s rights & discrimination attorney, says the most important thing for victims of sexual harassment is to document it and complain formally. Tuckner suggests keeping logs of every incident, and recording them if you can.

“Typically the victim cannot sue the perpetrator or file a police report unless an assault has occurred. When it comes to harassment, it’s the company’s responsibility to remedy the situation.” said Tuckner.

Tuckner cofounded Tuckner, Sipser, Weinstock & Sipser, a New York based law firm that specializes in women’s rights in the workplace. His team has helped thousands of women defend their rights to fair and equal treatment in the workplace. But if you’re like Samantha and your complaints haven’t be taken seriously, then what? Tuckner says to seek legal help.

“If they [human resources] are sweeping it under the carpet and just not doing anything, send a follow up notifying them that you are consulting a lawyer. We, [a legal team], can negotiate a divorce, pay a severance.”

If you are in school, many universities offer free legal aid to students, though you don’t need a lawyer to file a Charge of Discrimination with the Equal Employment Opportunity Commission. Filing an EEOC complaint is free and can be done online, but must be reported within 180 days from when the harassment occurred. Each state has different guidelines so be sure to check the deadlines.

Chelsea Jackson worked as a freelance photographer for local bars in her college town. What seemed like a fun and social job, quickly became demeaning and nerve-wrecking.

“Customers got out of hand. They would follow me around the bar while I was working, grope me and ask me inappropriate questions about my relationship,” she says. “Often they would make threats that they’d “turn me straight” and would proceed to try hold my hand or touch my crotch.”

Chelsea said management refused to reprimand the customers who assaulted her for fear of losing business.

“They didn’t want to kick out ‘paying customers,’ ” she explains. “Management never did anything and often told me, “If you don’t like customers calling you names and touching you sometimes, then you should just quit.”

And that’s exactly what she did.

“…despite the money being stellar…I couldn’t mentally withstand this behavior. “

Chelsea chose to leave a job that she actually enjoyed, harassment aside, and unfortunately, that’s the norm. For many victims, quitting seems like the easier option compared to going up against a company you feel may not support you, but Tuckner says quitting before you report harassment is the worst thing you can do.

“Don’t quit.” Tuckner advises “If you wait to get out then call a lawyer, a company can turn around a say you’re just disgruntled, however…if you complain of sexual harassment and they fire you, that’s a case. Retaliatory termination is illegal and compensable.”