You are here: Home / Blog / “What I’ve Learned From My Pregnancy Discrimination Experience” – by Chelsey Glasson

You’ll be confused by conflicting legal advice from different attorneys. You’ll quickly learn in vetting attorneys that there are many different approaches to fighting pregnancy discrimination legally. For example, you might file a complaint at the federal level with the Equal Employment Opportunity Commission (EEOC), or you might file a state-level lawsuit. I highly recommend checking out Jack Tuckner’s podcast for a more comprehensive overview of your options. 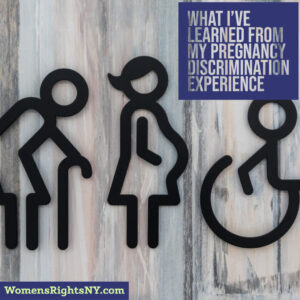 I remember learning, when I was a teenager, about sex discrimination against women in the workplace in the United States. I wrongly thought this was a once-common practice and thing of the past. Years later, I am among the 42% of US women who experience and report acts of sex discrimination — pregnancy discrimination in my well documented case — where we work.

Many of you will have your own encounters with this fact of life for women working in the corporate world. I write this article to share the most surprising aspects of my experience so that you, if confronted with pregnancy discrimination, won’t be surprised — shocked, stunned, and perhaps stopped cold — by what happens, and by what does not happen, next.

#1: Your company will likely depict you as the problem. I assumed that HR would intervene, would end the pregnancy discrimination, would reverse the retaliatory actions taken against me by those whose illegal actions I reported. I thought disciplinary action would be taken once I spoke out.

Instead, HR swung into action to shield the offending parties and protect the company from me. HR gaslighted me — attempted to convince me that what was happening wasn’t. HR wanted me to understand, and agree, that I was the problem.

What retaliation was I facing for asking HR for help? As one retaliatory strike, my manager started interviewing people to replace me. I reported this, and was told such behavior wasn’t retaliation. (I had a five-year history of stellar performance at the time.)

HR then suggested that I see a therapist to strategize how I might work effectively with my harassers given their awareness of my reporting pregnancy discrimination.

I’ve since learned that companies routinely employ a number of strategies, including gaslighting, to make discrimination reports, and the people who file them, go away quietly. This is because to take appropriate action on a discrimination report would be to admit culpability, which could lead to significant financial compensation for those discriminated against, negative press for the company, and even prosecution of the perpetrators.

#2: You’ll get conflicting legal advice. As you interview attorneys, you’ll discover many approaches to fighting pregnancy discrimination. For example, one attorney might counsel you to file a complaint at the federal level with the Equal Employment Opportunity Commission (EEOC). Another will recommend that you file a state-level lawsuit.

An attorney from a financially secure firm will recommend one approach; a lawyer working from a rent-a-desk store front will recommend the opposite. Many, many factors influence the thinking of the people you’re looking to for good guidance. I recommend checking out Jack Tuckner’s podcast Pregnant then Screwed, American Style for more insight on options that might be presented.

#3: Legal assistance won’t be cheap. A common impression is that fighting workplace discrimination won’t cost you anything — there must be a long line of attorneys hungry to file employment discrimination lawsuits on a contingency basis (meaning for for free) for a percentage of any settlement.

The situation is in fact much more complicated than that. Most employment conflicts settle well before making it to the step of filing a lawsuit. Lawsuits are a final course of action in an attempt to fight workplace discrimination, with many steps that can proceed going to court that attorneys might bill you for. I haven’t yet filed a lawsuit, but I have paid legal fees for steps leading up to and including filing an EEOC complaint.

If you do pursue litigation, expect the lawsuit to take years to unfold, and expect to spend at least $200,000 — and probably a lot more. Most attorneys will consider a contingency arrangement in such a situation only if the expected jury award is significant and when armed with ample, rock-solid evidence that discrimination took place. And even in these situations contingency arrangements aren’t cost-free. Lawsuits come with administrative fees that plaintiffs (that’s you) are often responsible for paying.

#4: A fair settlement won’t be the first option presented. When it comes to access to legal resources, companies virtually always have you at a disadvantage. They know this. They know you know this. Fighting pregnancy discrimination is usually not a fair fight.

Thus, if you choose to fight pregnancy discrimination, your employer (more accurately, your ex-employer; they will likely have found a way to fire or lay you off) will offer you a stunningly small settlement. And to get even that, you will sign a confidentiality agreement barring you from ever discussing the discrimination.

If, at this point, you still work for the company, your settlement probably includes a “walk away” clause, ending that employment. Once sex discrimination is reported women become viewed as too much of a liability to keep on staff.

My “walk away” offer arrived a few days after my daughter was born; it added up to my being paid less than three months of my compensation. Rather than leave myself without income and without benefits at the start of my maternity leave, I turned it down.

Those who kept their distance did so for their own reasons, most having to do with fear. Fear of saying the wrong thing. Fear of being asked to be part of the legal action. Fear of reprisal.

And then there’s the situation of people downplaying pregnancy-related challenges.

When I had shoulder surgery a few years ago, I was flooded with flowers and cards. Years later, when pregnancy complications culminating in an emergency c-section hospitalized me for a month, a few — very few — reached out.

Pregnancy discrimination, despite everything, still occurs in the workplace. To fight it, prepare yourself to face the challenges I ran into, and others that I didn’t. The challenges you will experience are common.

My upcoming article includes advice for those experiencing or wanting to be prepared for pregnancy discrimination.