You are here: Home / Blog / Must Employers Meet the Reasonable Needs of Pregnant Employees?

Ever since the US Supreme Court decided Young v. UPS in 2015 pregnant women now have greater work protections and are entitled to flexibility due to the challenges of pregnancy.

When you’re pregnant while working for a company with at least 15 employees, you’re entitled to a “reasonable accommodation” of your work and attendance responsibilities. Whether it’s the need for “light duty” because of pregnancy-related physical limitations, or flexibility about your arrival time because of severe morning sickness, for example, insist on attention and assistance.

The Case that Led to Increased Rights for Pregnant Women

Peggy Young, the Plaintiff in the UPS case, worked as a pickup and delivery driver for many years. When she became pregnant in 2006, her doctor restricted her from lifting more than 20 pounds during her first 20 weeks of pregnancy and 10 pounds for the remainder of her pregnancy. UPS told her that she couldn’t work at all because the company required drivers in her position to be able to lift packages weighing up to 70 pounds, so Young was placed on unpaid leave for the duration of her pregnancy.  She then lost her employee medical coverage even though she was pregnant and still employed, and then she finally lost her job altogether.

Young argued that her co-workers were willing to help her lift any packages weighing over 20 pounds during her pregnancy and that UPS had a policy of accommodating non-pregnant drivers for practically any old reason, including accommodating UPS drivers who lost their driver’s licenses due to drunk driving convictions, but flexibility for pregnant women, not so much.

UPS also accommodated drivers who were injured on the job, and drivers who suffered from a disability under the Americans with Disabilities Act, but not a pregnancy-related disability.

At the heart of Young’s case, the PDA also requires that employers treat pregnant women “the same for all employment-related purposes . . . as other persons not so affected but similar in their ability or inability to work.” It’s this murky language that the Young court decision interprets.

UPS argued that its decision not to provide an accommodation to Young was not discriminatory because it followed a company policy that does not take sex and pregnancy into account, a so-called “pregnancy-blind” policy. Two lower courts took UPS’s side, agreeing with UPS that it could legally exclude pregnant women from accommodation coverage even though it was so obviously unfair and exclusionary, but the Supreme Court disagreed, finding in favor of Young.

What is the Significance of the Outcome of This Case?

Since Young vs UPS was decided, pregnant women are almost always entitled to flexibility and a reasonable workplace accommodation due to pregnancy-related physical challenges.

This is also true because the PDA isn’t the only law that requires employers to be flexible and to provide accommodations to pregnant women. The 2008 amendments to the Americans with Disabilities Act also extended the scope of that law to require employers to provide necessary accommodations to women with pregnancy-related conditions that meet the definition of “disability,” and most do now meet that definition, and the EEOC’s Enforcement Guidance also supports the right of pregnant women to be reasonably accommodated during their pregnancies.

The law of pregnancy accommodation is complex, which is why women’s rights advocates continue to call for the enactment of a federal Pregnant Workers Fairness Act, which would cover all pregnant women and ensure that the requirements are clear and consistent for employers and employees alike. In states and cities where pregnant worker accommodation laws have passed, such as in New York, there has been a substantial decrease in the number of discrimination claims filed, so providing accommodations to pregnant women is clearly good for business, as it reduces turnover and absenteeism while boosting morale and productivity.

Companies can make sure that they’re in compliance by doing the following: 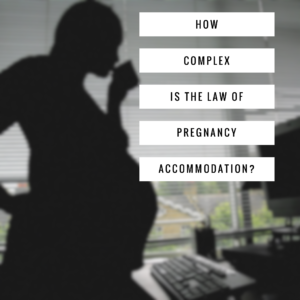 Most businesses already provide accommodations to pregnant women because they understand that it is in their best interest, and the best interest of their employees, to do so. The time has certainly come for those companies who have not already complied to get on board now.

Liability for non-complying employers under the PDA comes with not only compensatory and punitive damages, but often also hefty legal fees, which may far exceed the actual monetary damages awarded. On the other hand, accommodations required by pregnant women are temporary and typically inexpensive. The smartest and safest course of action for employers is to be flexible, reasonable and to provide them. We help clients when employers fail to take these actions.

We Can Help – Call Us Today to Learn About Your Rights

If you’re pregnant and being discriminated against at work, or if you’re denied flexibility and a reasonable accommodation of your pregnancy-related challenges, that’s illegal, so stand up for your right to be treated equally and fairly under the law, and put your complaint in writing.